Stratospheric aerosol injection (SAI) is currently the most feasible climate intervention strategy and is being tested at ever increasing scales. It is critical to understand the global downstream impacts of these locally created interventions. However, in the finest detail, predictions require bridging scales from individual aerosol particles to large volumes of Earth’s atmosphere. Here the application of a novel discretization paradigm, the Eulerian-Lagrangian Point-Mass-Particle (ELPMP) discretization, is investigated as a method to model seeding, transport, and evolution of aerosols from injection-scale to Earth-scale impacts.

Earth-scale effects of localized SAI are modeled for sufficient duration to capture the end-of-life of the aerosols. From a numerical perspective, this requires the long-time preservation of complicated sub-grid-scale physics. For example, a simplified description of an aerosol seeding event might include, in addition to the quantities contained in the Earth-system model, the date, time, and location of the seeding event, and the initial chemistry and particle size distribution of the seeded aerosol. Evolution of the aerosol is then characterized by changes in chemistry, particle-size distribution, and spatio-temporal transport – all of which occur at scales far below the Earth-system mesh resolution. Modeling described in this manner cannot be performed with current Earth-system discretization strategies. However, the Eulerian-Lagrangian Point-Mass-Particle (ELPMP) method can provide this capability.

The ELPMP method is a new discretization technique comprised of an Eulerian mesh and Lagrangian parcels, coupled through a novel relationship between the point-mass-particle velocity and the fluid-particle velocity [1]. Here the Eulerian mesh, velocity field and temperature is given by the Department of Energy funded Energy Exascale Earth System Model (E3SM) and the Lagrangian parcels provide simultaneous, numerically consistent discretizations of the system. The ELPMP introduces essentially zero numerical diffusion, allowing for long-time evolution of the sub-grid-scale physics and chemistry associated with SAI. In these ways, this novel ELPMP method has advantages over existing particle-tracking methods and semi-Lagrangian advection schemes. However, this increased accuracy does come at higher computational expense compared to the existing semi-Lagrangian methods such as those in E3SM, and will be quantified.

In ELPMP, all motion of the Lagrangian parcels is defined by physical transport, and the parcels are never numerically remeshed. This property allows any set or subset of the Lagrangian parcels to be further discretized. Any associated quantity can be transported and evolved. This critically achieves a consistent, conservative, multi-scale approach for modeling aerosols as a function of the local atmosphere, without smearing the solution over the length scales of the Earth-scale Eulerian mesh (a fundamental challenge of existing methods). The use of the ELPMP method to model the seeding, transport, and evolution of aerosols at resolutions far below the Earth-system mesh resolution, enabling the prediction of Earth-scale impacts in E3SM will be shown. This capability could inform the impacts of scenarios such as SAI, wildfires, and large-scale accidents, assisting in attribution of climate modifications to human and natural events.

Sandia National Laboratories is a multimission laboratory managed and operated by National Technology & Engineering Solutions of Sandia, LLC, a wholly owned subsidiary of Honeywell International Inc., for the U.S. Department of Energy's National Nuclear Security Administration under contract DE-NA0003525. The views expressed in the article do not necessarily represent the views of the U.S. Department of Energy or the United States Government. 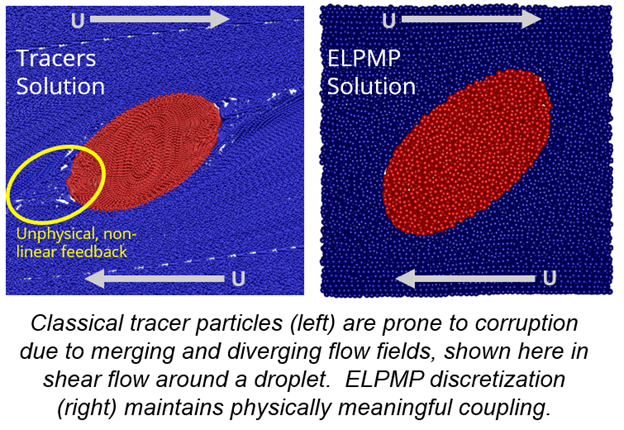