Most climate models ignore cloud scattering in the longwave (LW) for the sake of computational efficiency. Such approximation will not hold when the water vapor mixing ratio is low (e.g., upper troposphere and polar regions), particularly over the far-IR dirty window (~350-630 cm-1) where the single scattering albedo of ice cloud can be as high as 0.85. A recent study based on a slab-ocean model simulation shows a strong wintertime surface warming in the polar region due to the inclusion of ice cloud LW scattering effect. This study implemented the cloud LW scattering effect into a fully-coupled climate model, the Energy Exascale Earth System Model (E3SM) version 2 by DoE and assessed its impact on the simulated global cimate in a more comprehensive way.

By turning on and off the LW cloud scattering in the modified E3SM v2 model, we studied the cloud LW scattering effect by comparing four pairs of 35-year fully-coupled simulations. The cloud LW scattering warms the entire global troposphere by ~0.4 K in average; the warming is stronger in the Arctic (~0.8 K) than in the tropics. The Arctic wintertime mean surface temperature change caused by the LW cloud scattering can be as large as 2K. Using a double-call procedure (i.e., running an offline radiative transfer calculation as the model integrates), we further decomposed the outgoing longwave radiation (OLR) and surface downward longwave flux (FLDS) changes to changes due to the instantaneous radiative effect of scattering and changes by the feedback. The instantaneous global-mean OLR reduction due to the LW cloud scattering is 1.0 W/m2 and is pronounced in the tropics (as much as 2.5 W/m2). The instantaneous global-mean FLDS increase is small (<0.1 W/m2), indicating that most radiative flux redirected by the scattering is absorbed in the atmosphere. The FLDS increase caused by the feedbacks is much larger, ~2.2 W/m2 globally and 4~5 W/m2 in the Arctic, suggesting that the strong surface warming in the Arctic when LW scattering is enabled is primarily driven by the feedback processes. Finally, we analyzed the tropical cloud responses to the inclusion of ice cloud LW scattering. In the tropical middle troposphere, LW scattering leads to a cloud phase shift from ice to liquid, a lift of high clouds in the maritime deep convection region, reduction of anvil cloud coverage, and an increase of tropical marine stratus. These responses are analogous to the typical tropical cloud feedbacks driven by surface warming caused by the increase of greenhouse gases. To the first order, enabling ice cloud LW scattering keeps more longwave radiation in the climate system, similar to what the increase of greenhouse gas does to the climate system. The effect of cloud LW scattering on abrupt 4xCO2 simulation is also discussed. Our study suggests that the cloud LW scattering effect should be included in the coupled climate system for a faithful representation of the radiative process in the atmosphere. 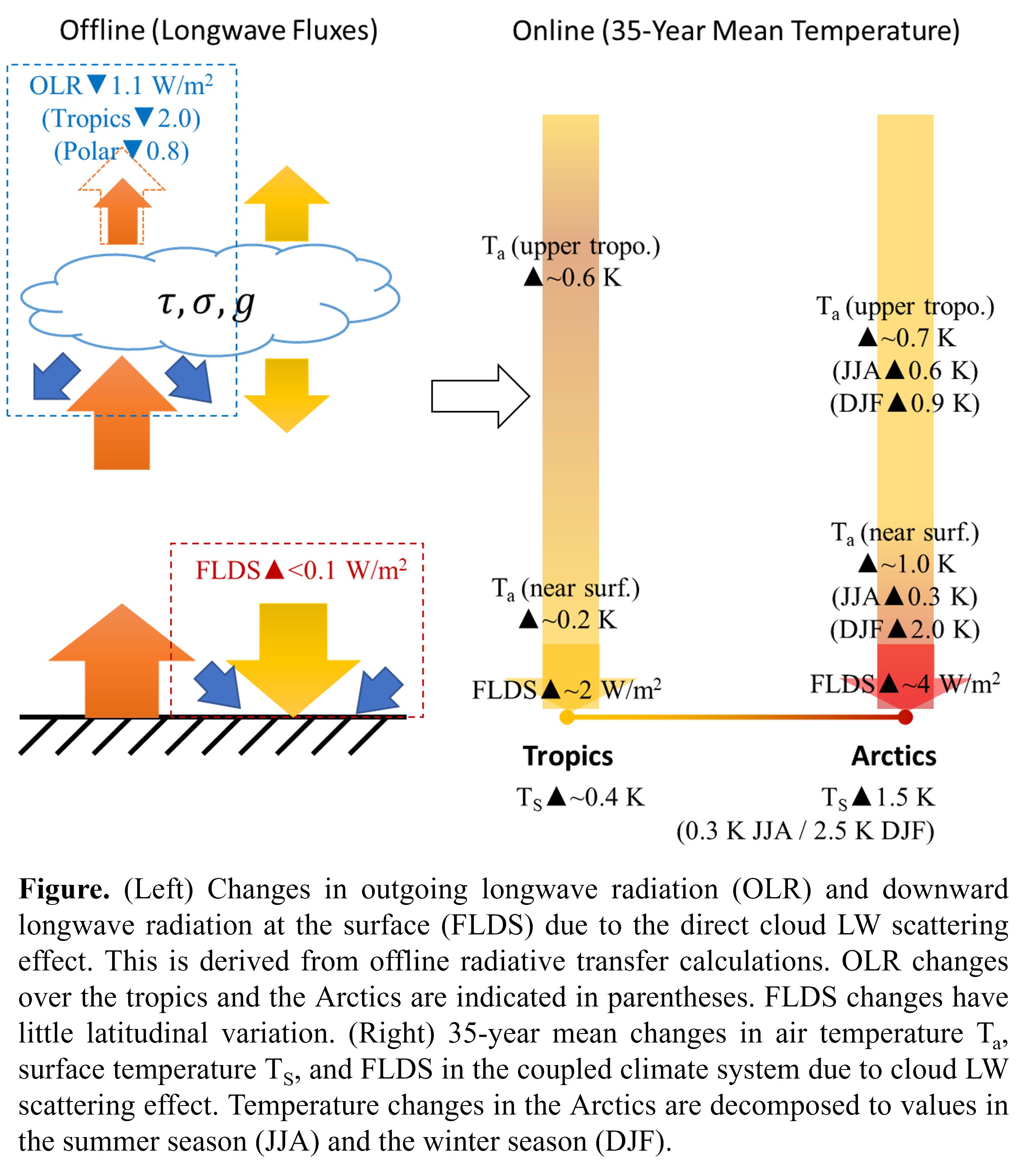