Humboldt Glacier (north Greenland) contains ice equivalent to 20 cm global mean sea level and the northern section of its terminus has retreated ~300 m/yr since the late 1990s. A 20 km-wide section of the glacier bed lies >200 m below sea level and deepens inland for 15–20 km behind the retreating calving front, indicating that Humboldt may have reached a phase of irreversible retreat. We present simulations of the past and future retreat of Humboldt Glacier using the higher-order MPAS-Albany Land Ice model run at 1 km resolution. To calibrate parameter values for submarine melting and stress thresholds for iceberg calving, we ran a perturbed-parameter ensemble of twenty-year-long simulations from an optimized initial condition. We scored these runs against average observed retreat rates of the northern margin and the southern sections of the terminus. The initiation of retreat in the model requires a very low threshold stress for calving from floating ice, and either amplified ocean temperatures or low stress thresholds for grounded calving are necessary to match observations.

We used the four highest-scoring parameter combinations to simulate retreat to the year 2100 under RCP 2.6 and 8.5 surface and ocean climatologies from MIROC5/MAR3.9 to explore the ranges of sea-level contribution (Fig panel a) and glacier retreat (Fig panel b) that are consistent with past retreat. These runs agree closely on an exponential sea-level contribution curve that reaches ~3.3 mm at 2100 for RCP 8.5, and on a sublinear curve that reaches ~0.8 mm by 2100 for RCP 2.6. Surface mass balance accounts for >75% of simulated sea-level rise for RCP 2.6 and >85% of sea-level rise for RCP 8.5, despite 11–23 km of retreat of the northern margin. A set of calibrated runs using HadGEM2 RCP 8.5 ocean temperatures indicate that a doubling in applied ocean thermal forcing by 2100 relative to the MIROC5-forced simulations results in up to 5 km more terminus retreat, but negligible increases in sea-level contribution. An assessment of the full range of sea-level contribution predicted by forcing the model with all available CMIP5 climatologies and a larger number of ensemble members is forthcoming. Despite the overdeepening in the glacier bed, we see no evidence from the model for significant sea-level rise from the continued retreat of Humboldt Glacier this century. 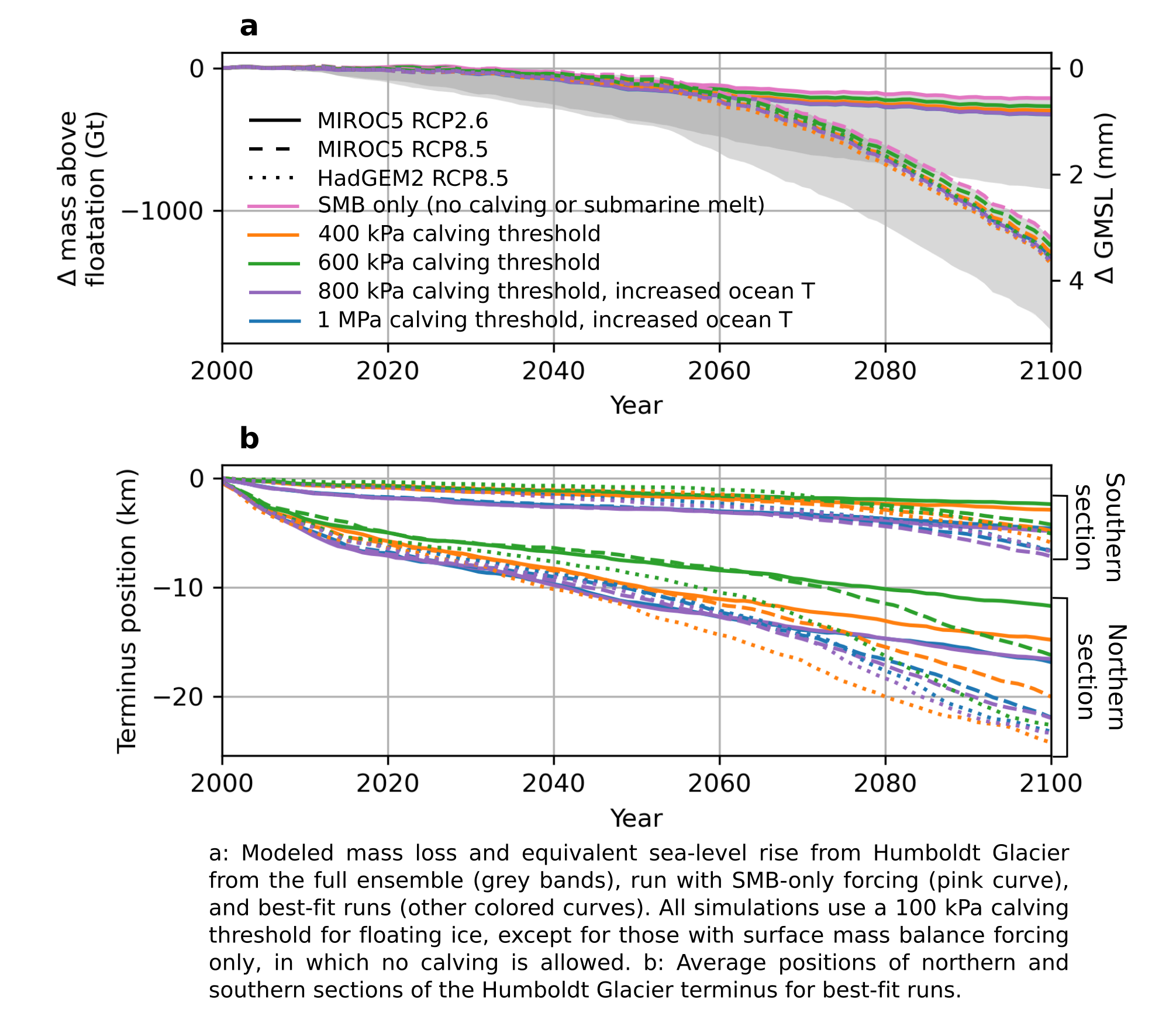