Observations show that the concentrations of Arctic sulfate and black carbon (BC) aerosols have declined since the early 1980s. Previous studies have reported that reducing sulfate aerosols potentially contributed to the recent rapid Arctic warming. In this study, a global aerosol-climate model equipped with an Explicit Aerosol Source Tagging (CAM5-EAST) is applied to quantify the source apportionment of aerosols in the Arctic from 16 source regions and the role of aerosol variations in affecting changes in the Arctic surface temperature from 1980 to 2018. The CAM5-EAST simulated surface concentrations of sulfate and BC in the Arctic had a decrease of 43% and 23%, respectively, in 2014–2018 relative to 1980–1984, mainly due to the reduction of emissions from Europe, Russia and Arctic local sources. Increases in emissions from South and East Asia led to positive trends of Arctic sulfate and BC in the upper troposphere. Within the Arctic, sulfate reductions caused a TOA warming of 0.11 and 0.25 W m-2, respectively, through aerosol-radiation and aerosol-cloud interactions. While the changes in Arctic atmospheric BC has little impact on local radiative forcing, the decrease of BC in snow/ice led to a net cooling of 0.05 W m-2. By applying climate sensitivity factors for different latitudinal bands, global changes in sulfate and BC during 2014–2018 exerted a +0.088 K and 0.057 K Arctic surface warming, respectively, through aerosol-radiation interactions. Through aerosol-cloud interactions, the sulfate reduction gave an Arctic warming of +0.193 K between the two time periods. The weakened BC effect on snow/ice albedo led to an Arctic surface cooling of –0.041 K. The changes in atmospheric sulfate and BC outside the Arctic totally produced an Arctic warming of +0.25 K, the majority of which is due to the mid-latitude changes in radiative forcing. Our results suggest that changes in aerosols over the mid-latitudes of the Northern Hemisphere have a larger impact on Arctic temperature than other regions through enhanced poleward heat transport. The combined total effects of sulfate and BC produced an Arctic surface warming of +0.297 K, explaining approximately 20% of the observed Arctic warming since the early 1980s. 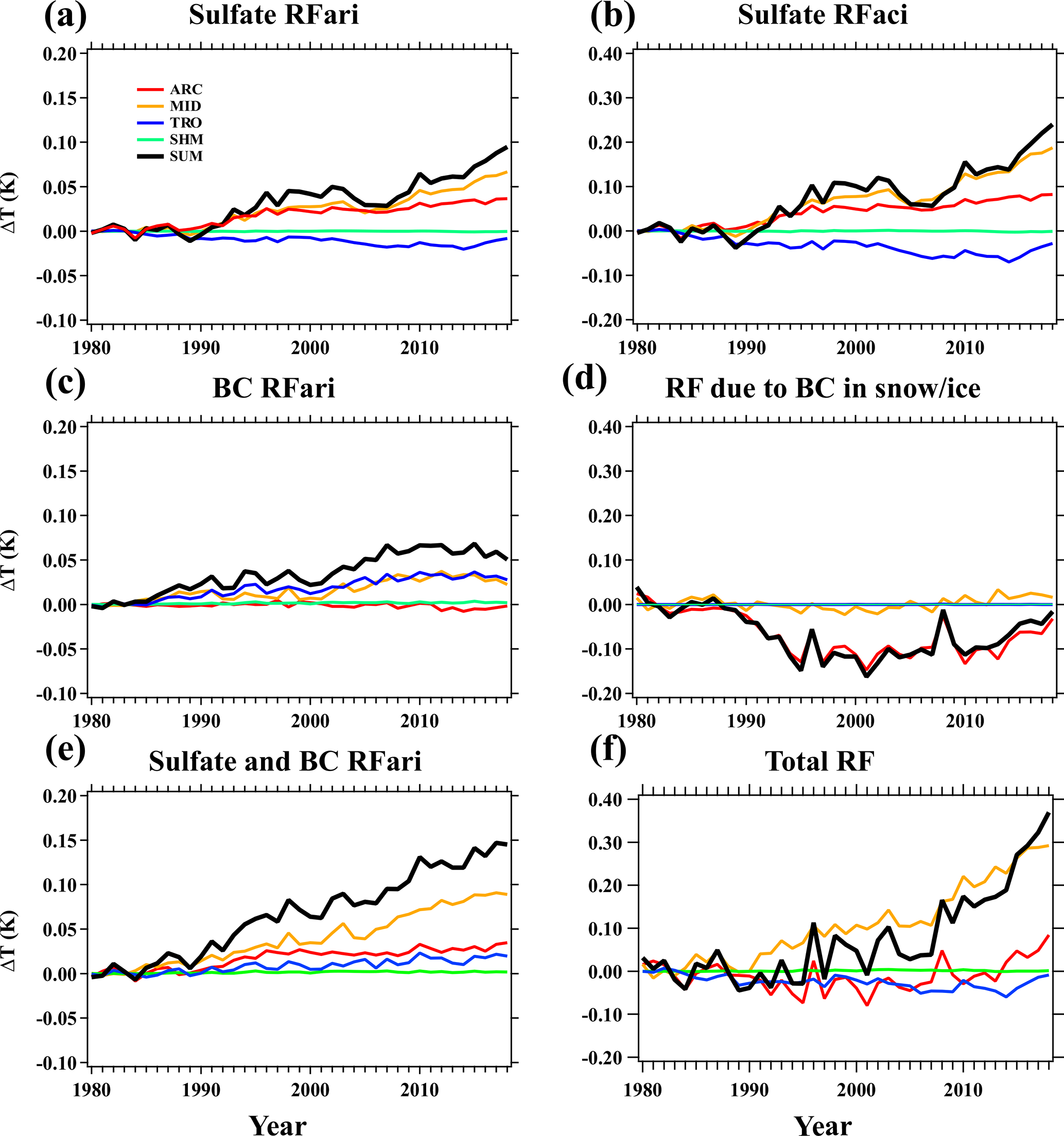