Predictive understanding of monsoon rainfall response to external climate forcing is one of the grand challenges of climate change research. Leveraging recent progress in the energetic constraints on the tropical monsoon and ITCZ, a diffusive energy balance model (DEBM) with parameterized radiative feedback is developed to understand how global energy flow responds to an energy source placed at an arbitrary location. The tensor from of diffusion is considered for the DEBM, with its symmetric component representing the isotropic diffusion effect of eddies and its asymmetric component, the advection of the column integrated moist static energy by both eddies and the nondivergent mean wind, respectively. Both components of the diffusion tensor can then be estimated using a simple physics-based machine learning technique. The resultant DEBM shows notable skill in predicting the leading neutral modes of the boreal summer tropical precipitation when forced by the corresponding optimal forcing of the modes. These neutral modes are derived from the singular value decomposition of the linear response function of the precipitation to q-flux forcing in a suite of Green’s function-type forcing perturbation experiments with a slab coupled AGCM.

The first neutral mode features an overall northward shift of the tropical rain belt with a strong dipole indicating a northward shift in the Atlantic ITCZ, a moistening over the Indian ocean and Indian subcontinent, and a negative “Southern-Flood-Northern Drought (SFND)” pattern over eastern China. This precipitation neutral mode pattern can be predicted based on a northward shift of the energy flux equator and an intensification of the atmospheric energy divergence in the Asia-western Pacific sector generated by the DEBM, implying a deterministic energetic constraint on this precipitation mode. The optimal forcing of this neutral mode is characterized by a strong interhemispheric contrast. As such, the slow-evolving ocean heat uptake (OHU) component under CO2 forcing with an increase in the north Atlantic and a decrease in the Southern Ocean projects strongly onto the optimal forcing, causing a slow downward swing in the leading model of precipitation and hence a secular trend toward SFND in East China. 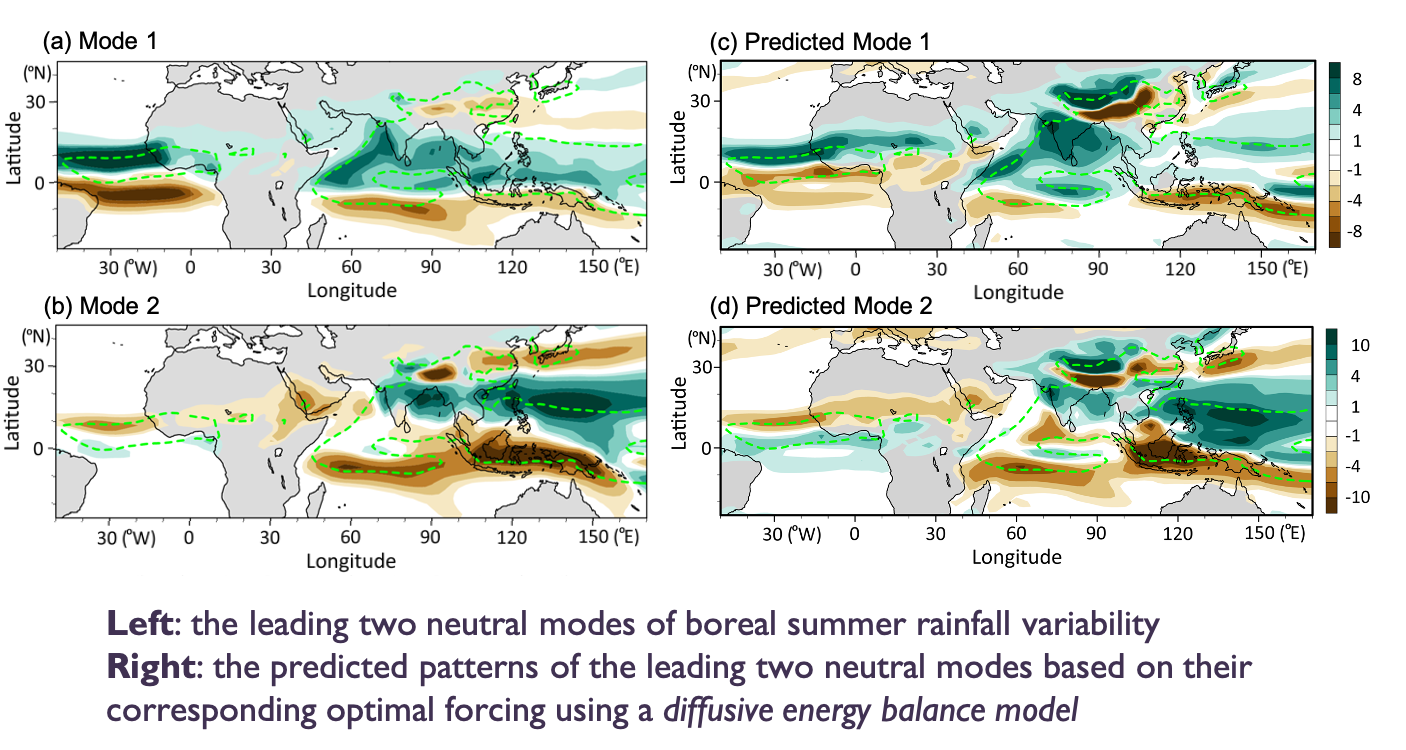